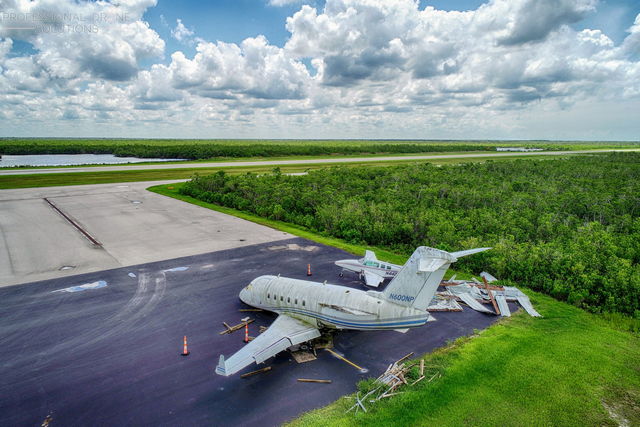 Drone Photography of N600NP at Marco Island Executive Airport. This plane crash landed in 2015 and was removed in April 2019.

The Crash Landing of Challenger N600NP

The visibility was 10 miles. Wind was calm at 5 knots out of 250 according to the automated weather observation system (AWOS) at Marco Island Executive Airport (KMKY). By all accounts, it was a beautiful day to fly. This March 1, 2015 flight would end in a less than beautiful manner.

KMKY was quiet. Jets and planes left at a “island time” pace as the sun beat on the asphalt. N600NP, a Challenger 600 with 9 souls-on-board lined up for final approach on runway 17. The captain bled airspeed down to the Vref speed for the Challenger, 135 kts. Flaps were 45 degrees. Gear was down. Seemingly all was going smoothly.

The plane crossed the runway threshold, touching down 400-500 feet beyond the touchdown markers. This is where things went very wrong.

The Pilot in Command deployed the ground spoilers to bleed speed and decelerate, hoowever, no spoilers came. The airplane slowed and the nose touched. The PIC applied brakes. Nothing happened. As troubleshooting happened, runway was running out.

Challenger N600NP ran off runway 17 in Marco Island on that sunny March day in 2015. The stress of the sand at the end of the runway caused the nose gear to collapse. As the jet finally came to rest, the pilot ordered an emergency evacuation of the 3 crew and 6 passengers. All escaped without fatality.

The jet sustained significant damage. In fact, the jet was written off as a total loss. The suspected cause of the crash: a failed spring in the No 2 brake’s upper control valve. The investigation did not find anomalies that would explain the failures of the spoilers and thrust reversers.

What happened to Challenger N600NP

Challenger N600NP sits at KMKY, Marco Island Executive Airport. We noticed it while shooting construction progress photos for the new terminal expansion, having started our shoots in early 2018.

Its turbine engines have been stripped from the airframe and sold. The aircraft was moved to the apron where it rested until April 2019, when it was moved during the construction of Marco Island Executive Airport’s new general aviation terminal.

Luckily no fatalities were reported and all ended as well as a crash landing can. One less Challenger 600 is flying around today, but with the airframe dating to the 1980’s, the owners likely used this as a good reason to buy an updated aircraft with solid maintenance logs!

Drone Photography in Jacksonville, Florida – What to look for in a drone company

Search for a topic: